The Maison Enfant Soleil signée Bonneville 2020 draw was held live this morning on the show Salut Bonjour, which was broadcast on TVA in the presence of Alain Dumas, spokesperson for the cause, and Caroline Forest-Aubut, the mom of Jayden, the project’s Enfant Soleil ambassador. The exclusive, unique model was named Jayden in his honour. Initially scheduled for July 16, 2020, the draw was postponed to minimize the loss of revenue caused by the lockdown. Mission accomplished! Thanks to the generosity of Quebecers, a record $2.4 million, half of which came through online sales, was raised this year despite an extraordinary context.

Congratulations to Mr. Éric Tardif from Charlemagne (ticket no 176043), the draw’s lucky winner. Mr. Tardif will be able to choose between the prize worth over $500,000, including the completely decorated and furnished house and funds for the purchase of land in the city of his/her choice, or the sum of $325,000 in cash. The draw for thirty-three (33) secondary prizes was also broadcast on the Opération Enfant Soleil Facebook page. It should be noted that even though the draw was postponed, no new tickets were printed for it. To find out the names and ticket numbers of all the winners, visit www.maisonenfantsoleil.ca.

This hopeful, inspiring project is made possible by the generosity and support of our partners, including Bonneville Homes, the official builder; IKEA, the official furniture supplier and decorator; Lowe’s Canada, the official materials supplier; and TD, the main provider of the funds for the land purchase. An initiative on this scale could not become a reality without the support of the companies in the provincial sales network: RE/MAX, Familiprix, Couche-Tard, RONA, Réno-Dépôt and Opto-Réseau.

The involvement of all our partners and public participation will again contribute to completing many projects in major paediatric centres, hospitals and regional organizations in Quebec this year. Since the first Maison Enfant Soleil draw in 1993, more than $28 million has been raised for the well-being of sick children.

Many thanks to everyone who participated and purchased a ticket this year. We invite you to watch the kickoff of the draw for the Maison Enfant Soleil signée Bonneville 2021. We thank you from the bottom of our hearts—because miracles do not happen on their own!

Jayden suffered from intractable epilepsy caused by a brain tumour. Doctors needed twenty-two long hours to remove the mass. The rehabilitation has been long, but our son can once again have high hopes. Thanks to your donations, Jayden was able to benefit from specialized devices that saved his life. 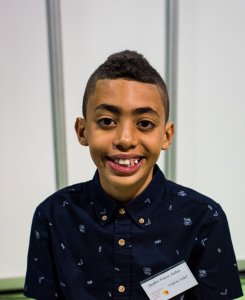