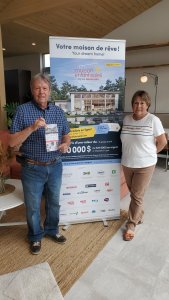 The Maison Enfant Soleil signée Bonneville  2021 draw was held live on August 26th on the show Salut Bonjour, which was broadcast on TVA in the presence of Alain Dumas, spokesperson for the cause. The exclusive, unique model was named Éloïse in the honour the project’s Enfant Soleil ambassador. Thanks to the generosity of Quebecers, nearly $3  million, of which more than $1 million came through online sales, was raised this year despite an extraordinary context.

Congratulations to Mr. Serge Jacques from Frontenac (ticket no 258638), the draw’s lucky winner. Mr. Serge Jacques will be able to choose between the prize worth $500,000, including the completely decorated and furnished house and funds for the purchase of land in the city of his/her choice, or the sum of $325,000 in cash. The draw for thirty-four (34) secondary prizes was also broadcast on the Opération Enfant Soleil Facebook page. To find out the names and ticket numbers of all the winners, visit www.maisonenfantsoleil.ca .