Offer the best care to sick children in Quebec and earn a chance to win $87,000 in travel credit

This morning, the third edition of the Passeport de rêve Air Canada draw was launched live on TVA’s Salut Bonjour program with spokesperson for the cause Anick Dumontet in attendance. Offering the best care to sick children in Quebec while dreaming about beaches, adventure or relaxation has never been so easily within everyone’s reach.

The draw’s grand prize winner will win $87,000 in travel credit, including eight business class tickets for any trip in Canada or any destination in the world served by Air Canada, one million Aeroplan Miles and $10,000 in cash. The winner will also have the option of choosing the $25,000 cash prize if he or she prefers. And that’s not all—forty-two secondary prizes graciously offered by the cause’s valued partners will also be drawn.

At a cost of $10 each, tickets are available now at Bikini Village, Canada Luggage Depot.ca, Flordéco, Meubles Léon, Stokes and Tuango.ca. They can also be purchased at passeportdereve.ca. The draw will take place on February 24, 2022, live in the studios of Rythme FM. We thank our valued sales network partners as well as Air Canada and Aeroplan for their support. In addition to earning a chance to win one of the forty-three prizes, each person who buys a ticket will receive several discount coupons redeemable at these merchants, including a 15% discount on the purchase of any plane fare with Air Canada. 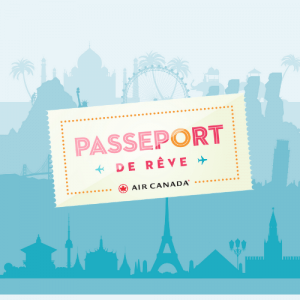 By purchasing your ticket, you will be making the most wonderful gesture of all: supporting medical teams throughout Quebec and backing families affected by illness in the province’s four major paediatric centres as well as regional hospitals. “The presence and generosity of all those who give are palpable thanks to the equipment that our son benefits from during his hospital appointments. It’s as if you’re telling us that it’s going to be okay…that you’re there for us. We wish you good luck and thank you for your generosity!” says Marie-Claude Bilodeau, mother of Emrick, who has been able to benefit from the best care at the Centre mère-enfant Soleil in the CHU de Québec. Because small miracles don’t happen on their own… Thank you!